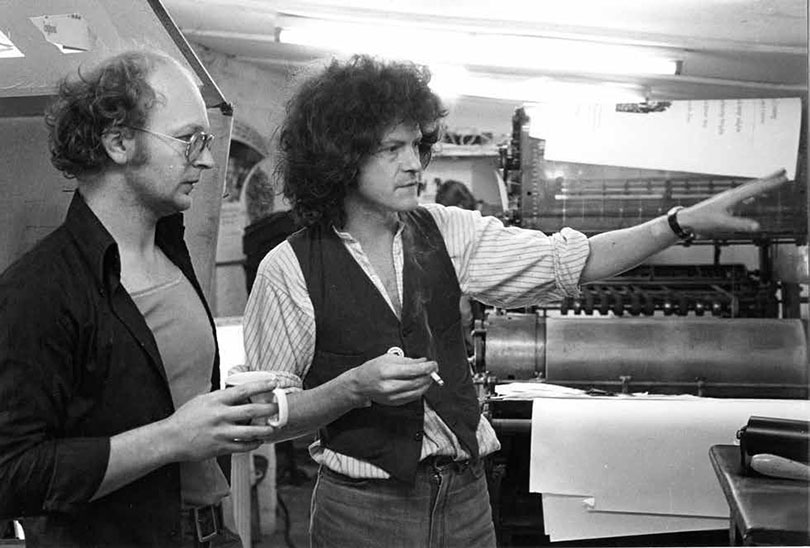 OHP publishing house was a unique partnership and collaboration between playwright and poet Heathcote Williams and graphic artist Richard Adams. Their declared intention was to continue the publishing traditions established by the British underground press, which, by 1975, save for a few notable exceptions, had become moribund.

Both partners had a long association with the underground press, Williams having contributed at some time or other, to International Times, Britain’s first alternative newspaper published in 1965, Oz magazine, Ink, Friends and Frendz,

Adams, in addition to designing, or contributing illustrations to nearly all of these publications and others, was the designer at Oz magazine from 1969 and intermittently until it ceased publishing in 1973.

Many OHP manifestations were dreamed up and produced in one continuous flurry of activity from idea until the finished artwork was sent to press. Artwork was manufactured, using an IBM Selectric Composer on which Williams had become expert and a rudimentary Copylin process camera, in a small, hectic, cork-lined studio in Notting Hill that doubled up as the Frestonian Embassy. Other publications took longer to ‘cook’. The Fanatic – The Paper of Passion, took more than a year to come to the boil before the arrival of an unexpected benefactor.

Publications were usually printed in very small runs and distributed through what remained of the underground press network, radical bookshops and mail order, but mainly by word of mouth. Some were produced to coincide with an event where the wares were sold at public places in true market fashion, touting by barkers more often than not, fuelled by liberal quantities of Old English Cider!

Open Head Press ceased publishing after the General Election of 1983, with the publication of the poster, Why I Will Vote SDP. We thought it appropriate that on the occasion of publishing Juggling Ghosts, we should revive the name in celebration of the author Heathcote Williams.

‘There’s a German word for people like Johnson: Backpfeifengesicht.’ Williams told the London Independent, explaining what drew him to the subject. ‘It means “a face that needs to be punched.”
THE WASHINGTON POST